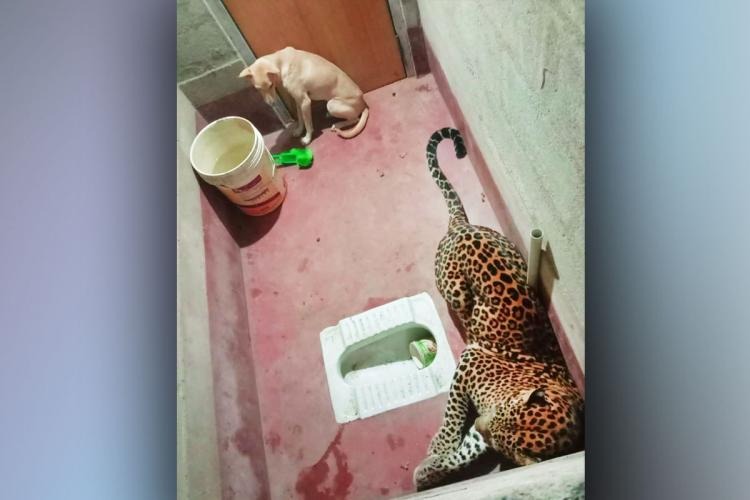 Usually, we hear about dogs chasing cats. Even if that is not always the case, the animal kingdom has some very scary members. In the wild, cats are much larger than dogs, as is apparent in this animal video from Karnataka. The video shows a trapped dog with a leopard inside a very small room.

Ever since it was posted on the internet, social media users were found anxious about the incident involving the leopard and the dog. We will not keep you in suspense. The dog survived the fearful encounter. Most consider it to be nothing short of a miracle. The dog was trapped with the leopard inside the toilet of a home. The whole ordeal lasted for hours, which might have been so much longer for the dog. The incident happened in a village called Bilinele. It is situated in the district of Dakshina Kannada in the Indian state of Karnataka.

How Did The Trapped Dog End Up There?

But how did the dog get trapped with the leopard in the first place? That too in a place like a toilet? The reason is quite alarming and horrifying. The trapped dog was actually being chased by the leopard. During the course of the hunt, both of them ended up inside the toilet.

This photo was taken from outside through a gap in the window. It is a leopard and a dog stuck together since this morning inside the toilet of a house in Kadaba, Dakshina Kannada district. I am told the leopard escaped at 2 pm and the dog is alive! pic.twitter.com/hgjJhaXW03

Then, a person living in the house caught a glimpse of the tail of the large cat, or at least so he claims. Sensing the danger of the leopard roaming free in the village, he thought of how to mitigate the damage. So he went and shut the door of the toiler as quickly as possible, and then locked it from the outside. This created the situation of the dog being trapped with the leopard. This situation had reportedly lasted for nearly six hours.

Luckily, the villagers were familiar with such situations and were well-educated regarding the protocol to be followed. They rang up the local forest department office. The wildlife personnel then arrived at the scene. Their original plan was to see it both the trapped dog and the leopard could be rescued without any danger. However, the leopard was too agile and strong. The personnel had laid out nets and hoped to trap the leopard without much struggle. But the leopard jumped and broke through the nets with its sheer strength, after which it dashed into the wilderness. Nevertheless, they then successfully recovered the frightened trapped dog.

The Natural Instincts Of The Leopard Saved The Dog

A picture of the two animals trapped in the toilet has since gone extremely viral across all platforms on the internet. The picture shows the two animals sitting at two opposite corners of the tiny toilet. The one who posted the image said that it was taken from the roof. To assess the situation, the villagers and the officers had deconstructed a part of the bathroom’s roof made of asbestos. 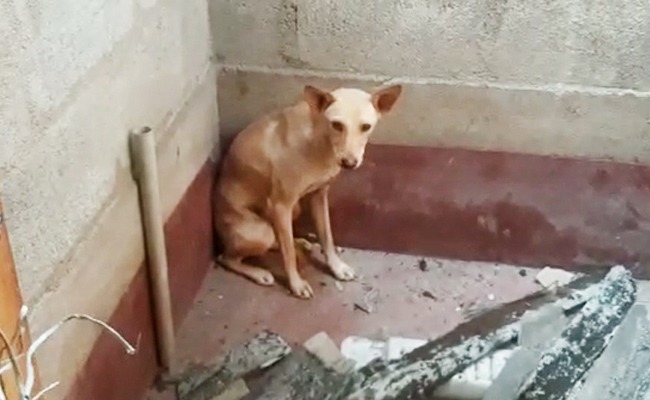 Parveen Kaswan, an Indian Forest Service Officer, is among the numerous users who have since spread it on Twitter. He remarked that all dogs get their days. In this case, it happened literally. He added that such a uniquely frightening situation can only be found in India. The amazing thing is that the trapped dog was being hunted before being trapped inside, and it still remained alive.

Users also got a laugh out of the situation remarking that the leopard probably only looked terrifying. However, another gave a more plausible explanation: big cats do not attack in confined spaces since they are wary of being injured which saved the trapped dog. Another poetic reply pointed out that it was similar to the film “Life of Pi”, in that the abnormal conditions force them to have mutually respectful co-existence.

Facing A Grim Future: Ensuring The Safety Of The Chimpanzees, Our Closest Living Relative