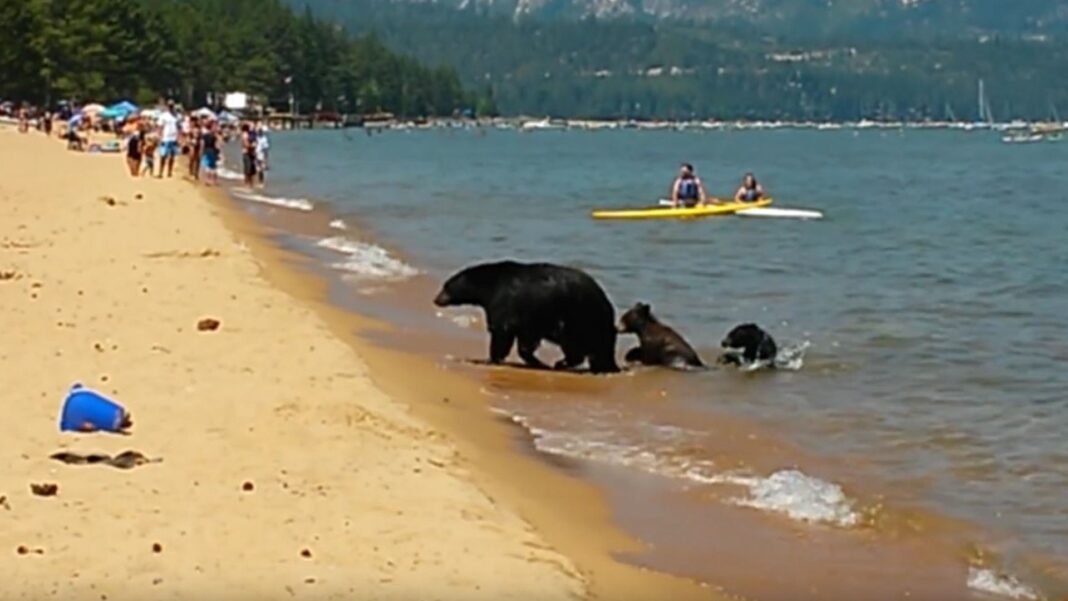 A Bathing Bear Family paid the lake a visit. This meant humans kept their distance but the dip was welcome for the bear family.

A rise in temperature and the rage of forest fires had impacted California largely. The humans are looking for a way out of this heat and so are animals. The bathing bear family was observed taking a swim in Lake Tahoe. The clip has gone viral and there are online debates going on about the issues.

The Bathing Bear Family In The Lake

The Bathing bear family consisted of a mother bear and 3 cubs. They were seen jumping into the water, which was surrounded by a lot of tourists. The moment looks incredibly cute with the cubs splashing water but in actuality, it is not so. The mother was guarding its cubs and we all know how mother bears are like. They are the most ferocious animals when it comes to the survival of their cubs.

The temperature recorded on that particular day was 91 degrees and explained why the bears had come so far to take a dip. They did not seem to mind the humans around them.

It was highlighted that mother bears are quite protective about their cubs and it is dangerous for people to be in such proximity. Other people had commented that the animals should be given their private space instead of being videoed or photographed. As soon as the clip went viral, people started talking about the reason why these wild animals traveled to the Lake. The topics of such debates revolved around the change in climate and how humans were affecting the animals by taking large chunks of the habitats. The rapid growth of urbanization and claiming forest land for agriculture were deemed as the major reasons.

This was not the first incident regarding the bathing bear family. Another family of bears was recorded taking a bath in the same lake. The officials around the Lake had warned people to not go close as they were deemed to be dangerous. They were not meant to be fed, enticed, or provoked. The family of bathing bears should be respected and given their own private space.