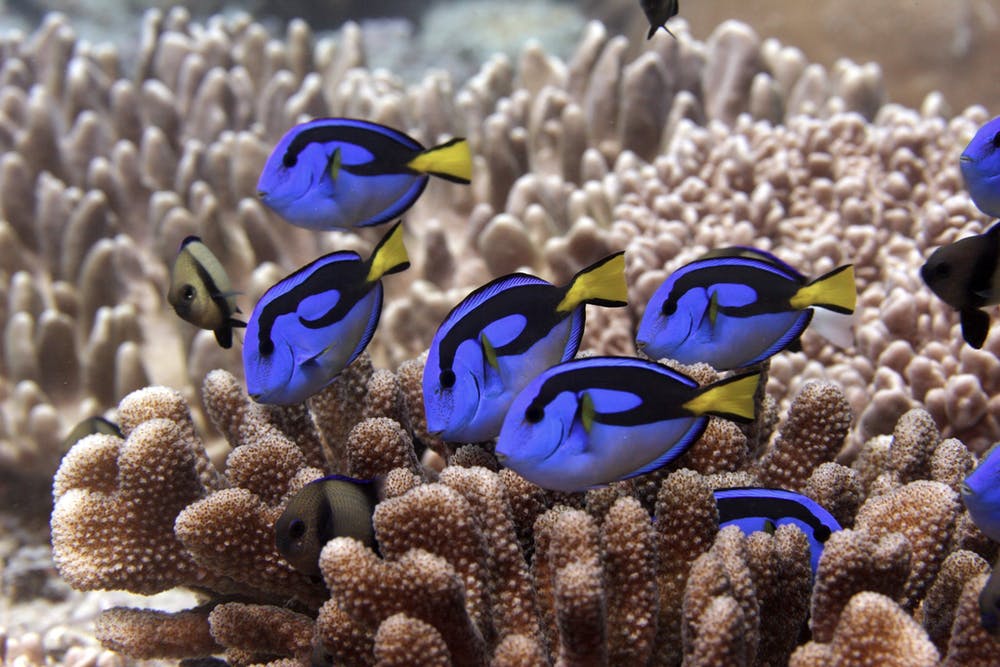 One of the most secluded and apparently idyllic regions on this planet is the Chagos Archipelago. The sandy beaches are covered with coconut trees that offer wonderful birdlife. The island is situated in the Indian Ocean and it is almost 100 miles away from any of the surrounding continents. Right under the waves, there is a long stretch of coral reef for several miles forming a mountain chain underwater.

The Chagos Archipelago was a paradise till heatwaves struck.

About 15 years back, the view underwater of the Chagos Archipelago was breathtaking. One could easily find schools of amazing-colored fishes in oranges, yellows, and blues, darting among the healthy coral reef system. Large predators like sharks swam overhead.

The archipelago has been protected from the fleets of the fishing industry and other harmful activities that might possibly damage the coastal ecology. This is mainly owing to the remote location on Earth that safeguards the biggest coastal and aquatic protected area worldwide.

An aquatic heatwave had struck during 2015 and greatly harmed the coral reefs all over the world. A group of marine biologists from the Miami University led a 10-year worldwide expedition in order to map the coral reefs across the world. The chief researching body, Khaled Sultan Foundation had concluded their work on the Chagos Archipelago during that time. Their report was eventually published during the recent spring of 2021.

The coral started to bleach as the temperature of the water began rising. The process will seem to be fantastic to people without the correct knowledge. The corals get stressed as the water warms up and they blow out the dinoflagellates or tiny algae that reside in the tissues.

However, bleaching is not a simple process and the corals simply don’t turn white. Once the algae are expelled, the coral transforms into fluorescent pink, yellow, or blue in color. This is because the chemicals produced help them protect themselves against the harmful rays of the Sun. Bleaching reveals psychedelic color-changing of coral reefs. 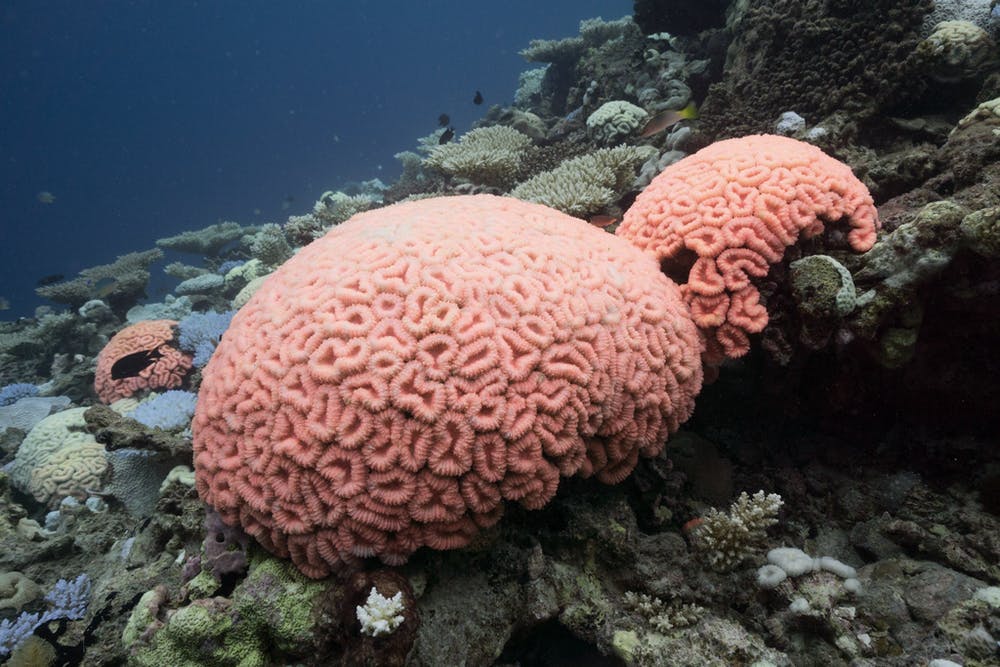 Such a rare explosion of colors is short-lived. During the next week, the researchers observed the whitening process of the corals as they were dying. The bleaching process took place over hundreds of miles of coral reefs.

Many people are unaware of the small colonial polyps which create skeletons of calcium carbonate. After the algae leaves, coral polyps are still able to feed by tugging morsel from the water. Nonetheless, the metabolism starts slowing in the absence of algae that provides additional nutrients by means of photosynthesis. They become vulnerable to various diseases that ultimately kill them.

However, the Chagos Reef was not the only destruction happening in the world coral reef system.

The surface temperatures of the water bodies have risen by an estimated 0.13℃ each decade since the last century. Meanwhile, the oceans have been absorbing a large part of greenhouse gasses emitted by human activities, especially fossil fuel burning. As a result the temperature increases that transforms the ocean chemistry among marine life.

This has an adverse impact by deteriorating the oyster shells and small pteropods that are a crucial part of our food chain. The fish populations are driven towards cooler waters. A rise of a mere 1℃ in temperature stresses the corals. As the water temperature is surging due to global warming, a small heatwave may have a devastating impact on them. 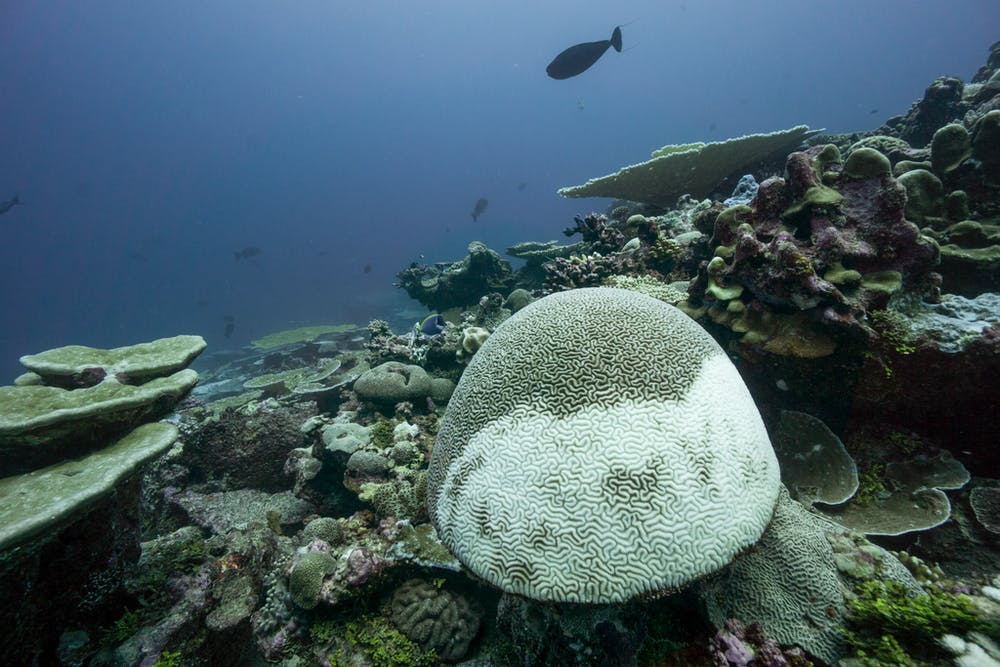 The powerful event of El Nino caused mass bleaching of the Chagos reefs as well as other reefs in the world. This became the 3rd largest bleaching process after 1998 and 2010. Along with the corals, the entire system of reefs that shelters and promotes marine life get affected by bleaching. A study near New Guinea Papua showed a decline of 75% marine life after the bleaching of 1998.

Studies reveal aquatic heatwaves estimate 20 times additional impact as compared to 4 decades ago. Some places are expecting to bleach every few years now. The increase in heatwave frequency does not provide the time for corals to recover.

Read Underwater Museum And Its Attempt To Save The Coral Reef

Nations have also started future planning by allotting billions of money each year to protect the coastlines from natural disasters. The Great Barrier Reef has also been greatly damaged. Some reefs seem more resistant than others. Strong, cool currents along with cloudy and stormy areas prove to be helpful in preventing heat waves.

The world already lost 30-50% of reefs in the past 40 years and scientists believe the remaining might disappear within decades. In recent years, several marine species are migrating to subtropical waters since the planet is rapidly warming up. These marine damages are irretrievable because it takes over a thousand years for reefs to grow and get established.

If human activities like fishing, pollution, runoff, and large-scale coastal development are controlled, the reefs are better equipped to combat climate pressures. Building large protected areas can safeguard coral reefs. Chagos has almost 640,000 km² of protected areas. Although the island still has hopes of recovery only by reducing heat waves.

Research missions have already found a small amount of reef recovery in Chagos that is insufficient. Coral reefs correspond to a canary present in coal mines. However, harmful human activities have collapsed the natural ecosystem on a global level. The swift loss of reef systems is a harbinger of forthcoming damage to other natural ecosystems that are already vulnerable.