Climate Change is one of the biggest concerns in the modern world. The world has advanced rapidly in the last century. Technology has been a key component of the modernized world.

However, the rapid advancement has brought with it a major setback for the Earth. A number of adverse effects have plagued the Earth in the recent past. Industries have been growing rapidly in the past few decades.

They have contributed largely to the Earth’s degradation. In order to accommodate more industries, forests are being cut down. The mass destruction of the forests has led to deforestation.

We all know that trees give out oxygen and soak in harmful carbon dioxide. However, with the large-scale cutting down of the trees, the harmful gases are getting trapped into the atmosphere. Toxic gases like carbon dioxide, carbon monoxide, etc are emitted daily.

Vehicles and Industries use fossil fuels as energy. The burning of fossil fuels is the main source of these emissions. These gases mix in the air and form a blanket in the atmosphere. This blanket acts as an impenetrable barrier restricting ventilation.

This can be deadly as it will result in massive tsunamis. Changes in climatic conditions are resulting in desertification. Desertification refers to the expansion of the desert turning fertile soils barren. Sudden heat waves and forest fires are the results of climate change.

Many exotic animal species are in danger of getting extinct due to this problem. They are forced to abandon their natural habitat and relocate. An artist from Italy has addressed the rising concerns of Climate Change in his art.

An artist has dedicated his artwork to raise awareness about the fatal consequences of the changing climate. Let us learn more about the story in detail below. 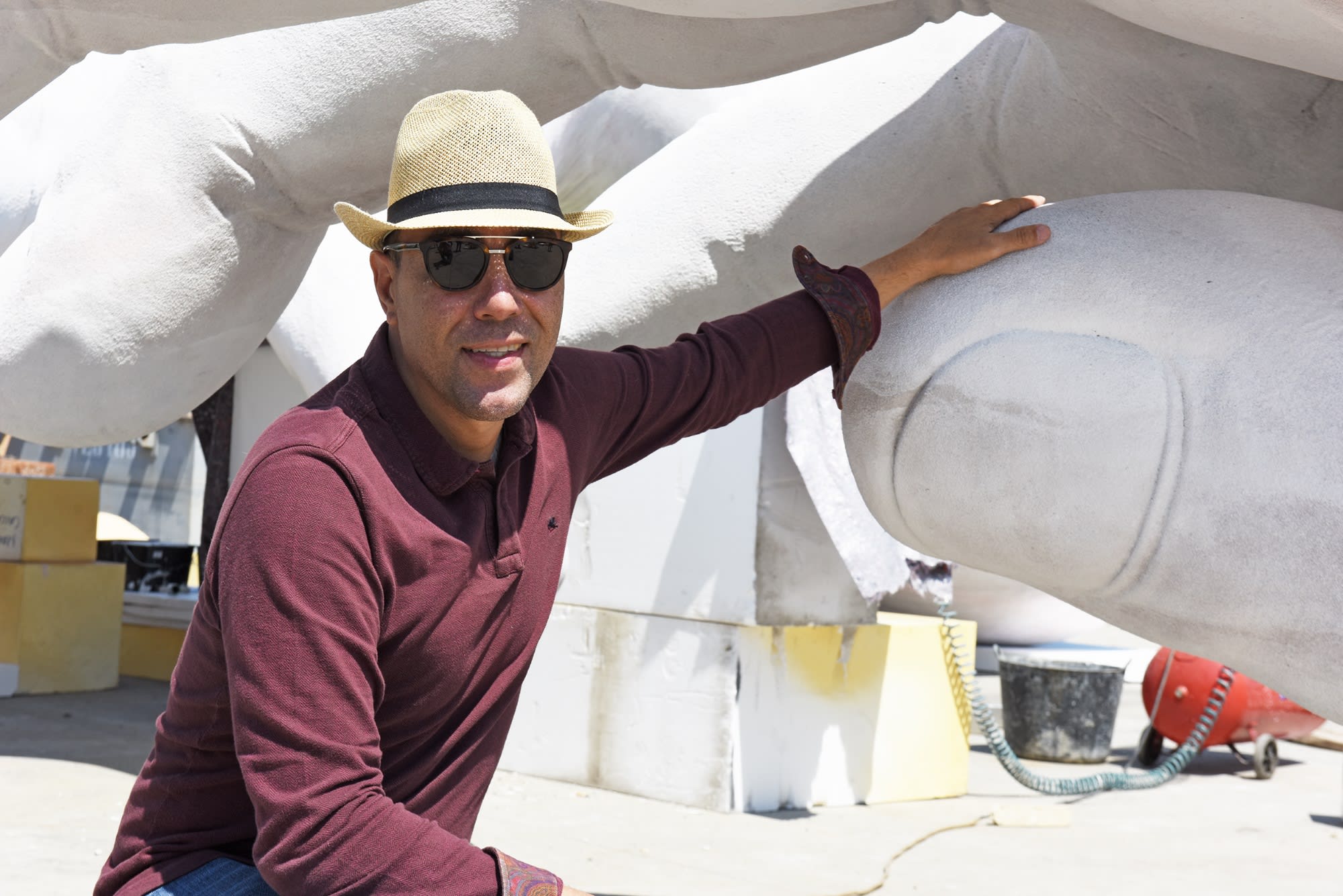 Climate Change In The Eyes Of Lorenzo Quinn

Lorenzo Quinn is one of the famous names in Italy. Quinn is famous for his unique sculpting skills. He has recently dedicated his artwork to attract everyone’s eyes to climate change.

His artwork consists of two huge hands. The hands emerge from the Grand Canal and prove as a support to the Ca’ Sagredo Hotel. Venice is facing serious consequences from climate change. The water level has risen considerably over the last few years. 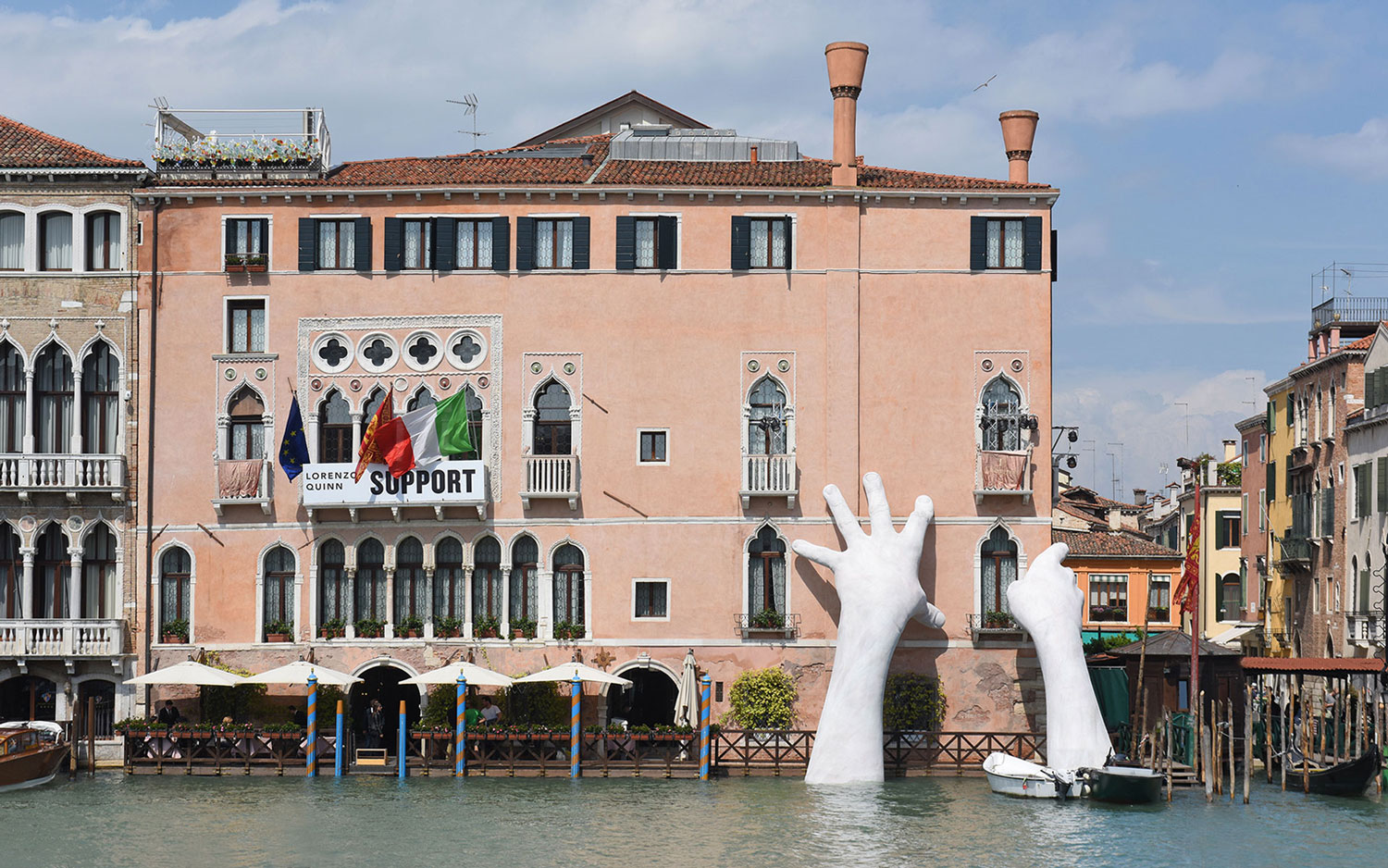 The city of Venice is sinking slowly and faces the threat of a huge catastrophe. The rising levels of water are damaging some of the greatest heritage sites as well. Such a site is the Ca’ Sagredo Hotel. Quinn has installed his artwork at the Grand Canal which symbolizes humanity.

The United States has decided to withdraw its support from the agreement of Paris. This is exactly what Quinn wanted to address in his art. More on the details below.

Quinn titled his work on climate change “Support”. The title is symbolic of the withdrawal of the US from the Paris agreement. The artist stated that the hands have a double meaning.

On one side, they can provide support to the hotel. It can prevent the hotel from falling. On the other hand, the hands can choose to withdraw the support and let the building get destroyed.

Read: Back To The Dust Bowl Of The 1930s: A Repeat Of The Black Blizzards Due To Poor Land Management And Climate Change

Quinn elaborated that the hands are immensely powerful.It possesses the power of love, hatred, creation, and destruction. Quinn’s artwork stands at a staggering height of thirty feet. The sculpture was unveiled during the Venice Biennale International Art Exhibition.