Dog Hugs Homeless Man in an act of kindness. The clip of the adorable act has instantly gone viral. Dogs are always known as a man’s best friend. They are well known for their unconditional fidelity towards their masters. 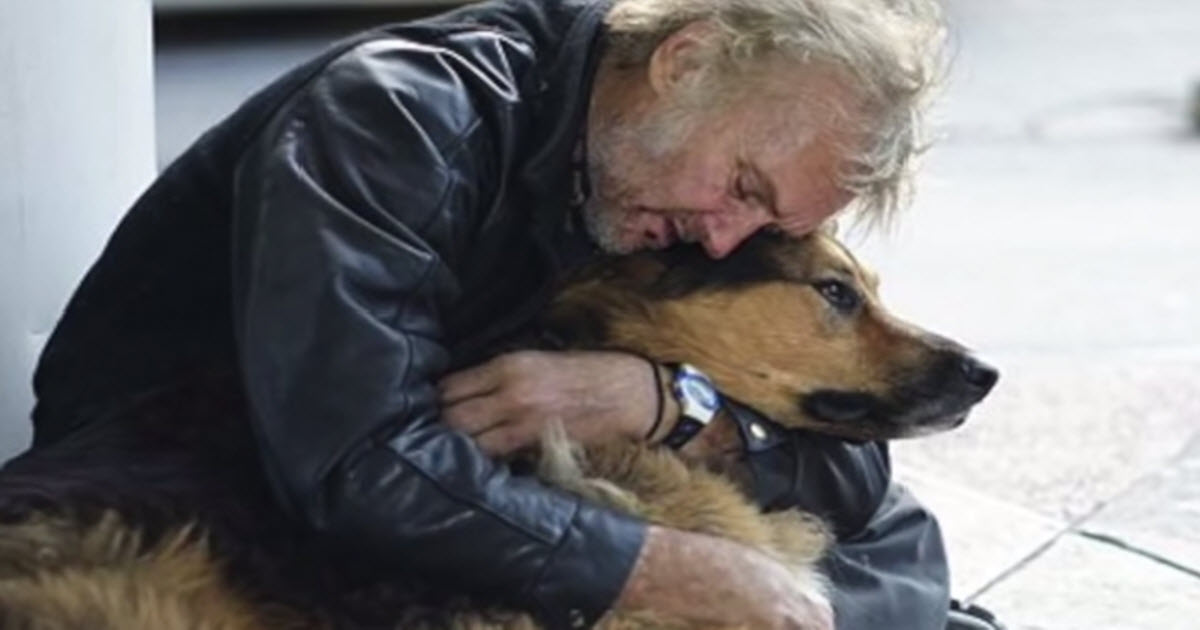 There has been a number of instances where dogs have come to the rescue of humans. A recent incident got viral of a dog saving a man’s life in the snow. The story was posted on social media and everybody was left awestruck. The dog and his master went hiking in the snowy mountains.

Unfortunately, the hiker slipped and fell injuring himself badly. His dog came to his rescue as he covered him to provide warmth. The dog repeated the gesture all night long till the rescue team arrived. The whole internet was left astounded by the act of the little dog.

Our story for today is no less intriguing either. This story is a recent event that has once again brought into light the loyalty of dogs. The way a dog hugs homeless man is a sight that no human being can possibly unlike.

A video was posted recently on Twitter that portrayed the awe-inspiring act of kindness. It showed a dog cuddling a homeless man. Experts believe that this was the dog’s way of comforting the man.

The animal somehow understood that the man was feeling low. In order to cheer him up, he took up the initiative upon himself. Let us learn more about the incident how the dog hugs homeless man in detail below.

The way the dog hugs homeless man is no less than a tear-jerker. The viral video shows that a homeless man was sitting on the street. Suddenly, a dog who was wandering across the street came close to him.

The dog stopped just before the homeless man and stared at the man for quite some time. The homeless man did not seem to take note of the dog. After a while, the doggo hugs the man as a comforting gesture.

Startled by the act, the man smiles and hugs the dog back as well. The dog did not leave the stranger immediately. The two of them continued hugging each other for a significant period. The video was soon uploaded on the social platform.

People all over the world went gaga over the act. Social media users showed love and support for both the man and the doggo. Others commented on how dogs are great pets to have.

The video of how the dog hugs homeless man was uploaded on the internet on 30th December. A user named Buitengebieden posted the viral clip. The clip received huge engagement and has more than five lakhs views by now.

Buitengebieden aptly captioned the video by saying that it seemed the doggo knew exactly what the stranger required. This viral act of kindness has once again proven the greatness of dogs. You need not own a dog to receive love.

They are willing to shower any humans with love and kindness anytime. Activists have encouraged people to join the movement in rescuing stray dogs. Stray dogs are a heavily neglected species.

The dogs are not well nourished and are homeless. Several programs have been set up in order to provide the strays with a better lifestyle.