The Pink-Necked Green Pigeon: The Most Beautiful In The World 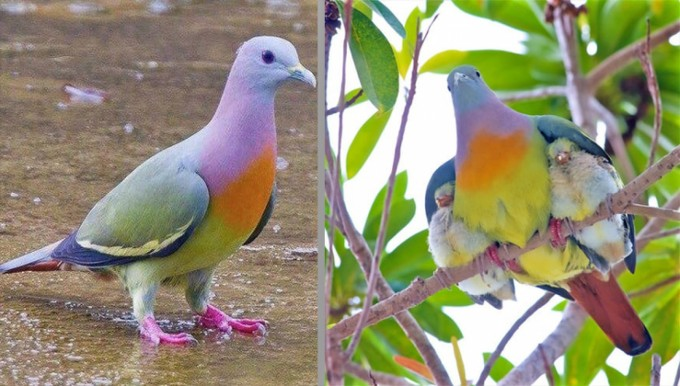 Whenever we talk about beautiful or majestic animals, we tend to slip into lions or tigers, not to a pink-necked green pigeon. The pure elegance and might of these large cats are to admire but the pigeon deserves some praise too.

Most people would not prefer rating a pigeon. They are not loved due to the terrors they cause. You might leave an uncovered car in the streets but return to white some gift waiting for you on the roof of your car. Some people have also named pigeons “winged rats”.

There is a special species of pigeons that can prove these haters wrong. It is the pink-necked green pigeon.

The pink-necked green pigeon belongs to the dove and pigeon family, Columbidae. Its scientific name is Treron vrenans and is found abundantly in Southeast Asia- especially in Vietnam and Myanmar and the islands of the Philippines and Indonesia.

The bird is medium-sized and shows off a green plumage. The male breeds of these species have the pick neck which gives the name as such.

The pink-necked green pigeon is observed to live in forested habitats or even in man-made ones. The bird prefers to stay in open habitats. 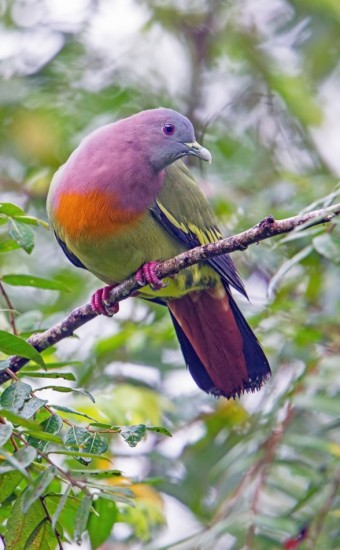 The food that the pink-necked green pigeon prefers is fruits, especially figs.

The couples lay two eggs in their nest and work in tandem to hatch the eggs and raise their babies. The nests look quite flimsy and frail, which consists of twigs and feathers. The nests are commonly found in trees, shrubs, and hedges.

The pink-necked green pigeon is a greater seed disperser. They have adapted pretty well to the changes humans made in their environment. They are spotted in big cities as long as the fruits or trees are present. It is in no threat of extinction unline other species.

“Pink-necked green pigeon” is designated as the official name for the species by the International Ornithological Congress. The Handbook of the Birds of the Worlds Alive lists the subspecies only with provisions that the differences are clinical and research can be made into them which can deem them valid.

The Pink-necked Green Pigeon And Its Features

The pigeon in concern is medium in size, 25-30 cm in length. It weighs around 105-160 grams. The plumage of these pigeons is dimorphic on the basis of sex. The males have grey heads and pinkish upper breasts and necks. The remaining breast is orangish in color. Their backs are olive green in color while the wings are greenish with black and yellow edges. The edges create a yellow bar when the bird is flying. 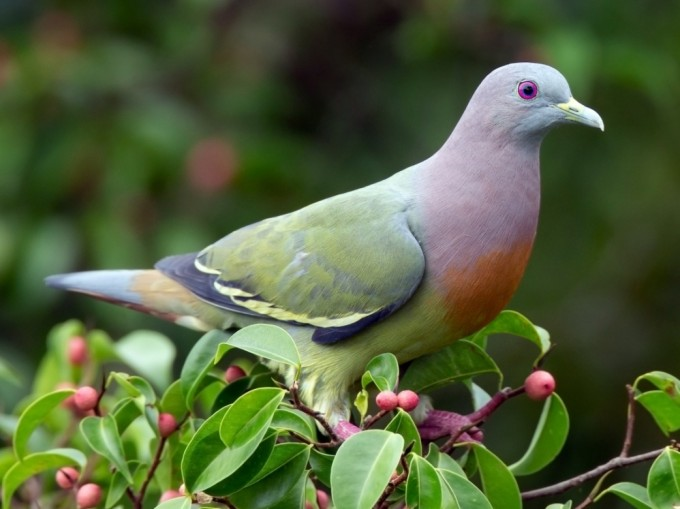 The females are smaller in stature and have pinkish or reddish legs. The bill is white, green, or grey. The tiny birdlings are similar to the females but a little greyer.

Treron pigeons do not have cooing calls but make whistles or quacks. The male pigeons make a tri-syballic call, which begins in a whistle and ends in a coo. The species prefers to remain non-vocal but only call when they find food.

The pink-necked green pigeon is found in southern Myanmar, Cambodia, Thailand, and Vietnam. It can be found further south in Bali, Sumbawa, Lombok, the Philippines, and the Moluccas. It can be observed to exist in various habitats like- forests, mangroves even in some secondary forests. The pigeon prefers open environments.

It can be found in gardens and farms too. The HBW recorded this as a non-migratory bird but others have observed it to make local movements. The thick-billed green pigeon covers large areas to look for food. People believe that it might be the same for the pink-necked green pigeon.

After the volcanic eruption in 1883, Krakatoa was destroyed. The pink-necked green pigeon was the only surviving frugivore that could establish itself on the island again. It chose to survive on fruits, only and not a wider diet.

The pigeon was able to colonize the island of Anak Krakatau after it emerged from the sea. The birds later became extinct due to predation and a small population arising on the new island. The birds had later colonized Flores, sometime after 2000.

The Diet Of These Pigeons

The pink-necked green pigeon is a frugivore. It consumes a wide range of fruits especially figs. Breynia, Vitex, Muntingia, Bridelia, and Melastoma are some of its favorites. The birds feed in the middle canopies and rarely gathers food from the ground level. 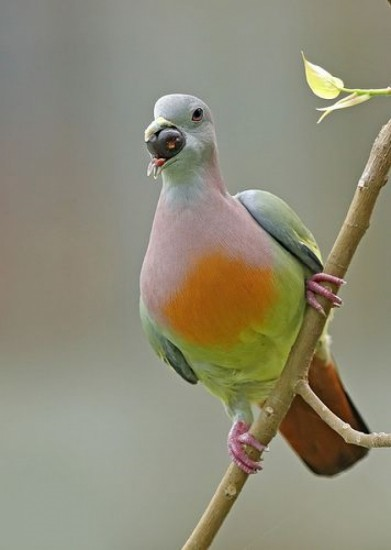 The bird is quite active when climbing on branches to gather fruits. The gizzard is quite muscular and gritty. It can crush and digest seeds inside the fruits.

The bird does not have a particular breeding season and breeds across the year. The nest is built by the females while the males gather the construction materials. The nest is quite flimsy and built with fine materials and twigs.

The nest can be found in trees, hedges, or shrubs. The biology of breeding is unknown virtually. Only one was reported from Singapore. The male was found to incubate during the mornings while the females took care in the night. The time for incubation is 17 days. 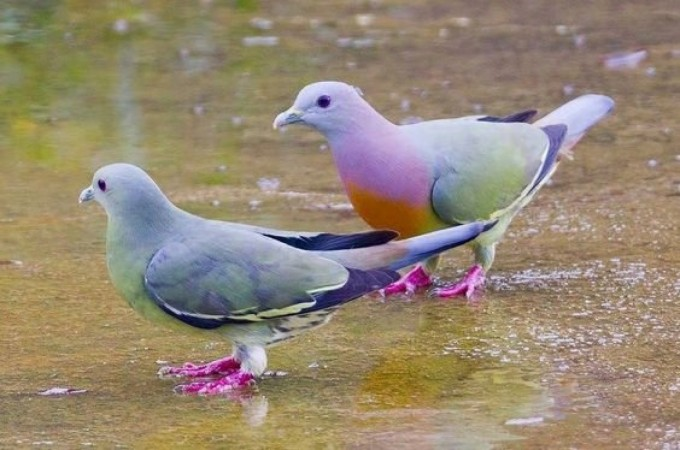 The chicks are born with brownish skin with some white pin feathers. The chicks leave after 10 days but remain close to the nest. They are continuously fed by their parents till they come of age.