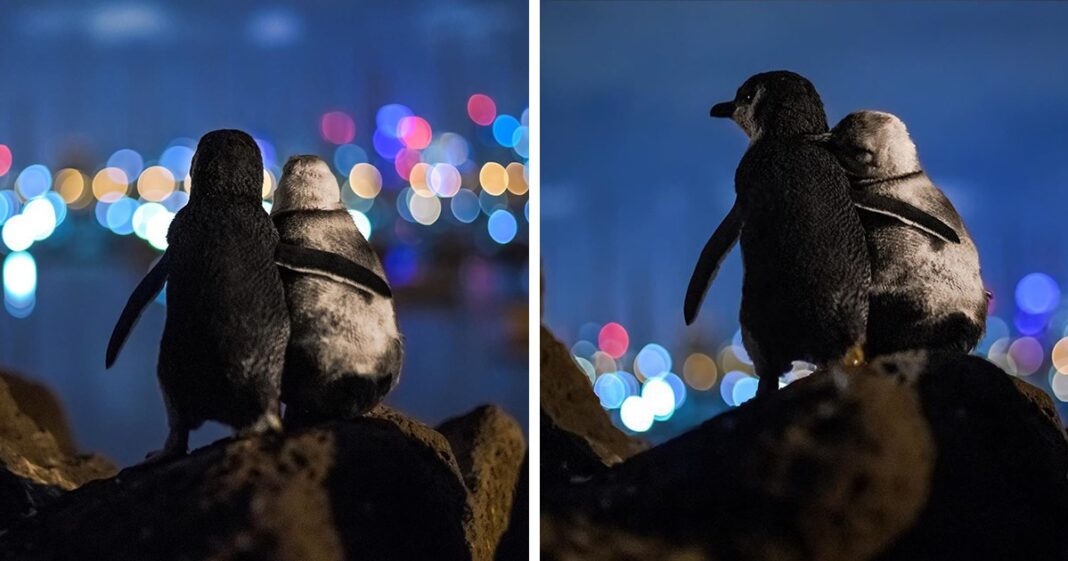 A recent photo taken last year has been doing the rounds on the internet tugging on the heartstrings of all those who see it. In the picture, there are two penguins hugging each other. They are faced away from the camera and are looking at the skyline of Melbourne in Australia. People from across the world could not help but let their emotions run free.

Tobias Baumgaertner was the man behind the lens for the touching moment that has now been immortalized. The incident took place in a suburban area in Melbourne known as St. Kilda. Tobias said that he had taken the photograph two years ago, in 2019. But he got around to posting the image on Instagram only a year later.

After it went viral on Instagram, the photos made their way to Twitter as well. It did not take much time for the photos to be one of the highest trending topics.

Matt, a Twitter user, commented that he could not keep the pictures of the two penguins hugging out of his mind. The scene in which they were looking out at the skyline of Melbourne inspired him to search for the one who had taken the snap originally. Then he got to know of an even more touching reason: the two penguins had both lost their mates recently. He exclaimed that it was too difficult to handle. Matt has two accounts on Twitter catering to dogs. The tweet had soon gotten over 150,000 likes. It had also been retweeted over 50,000 times.


Carole Nelson, a woman user on Twitter, commented that the scene was too beautiful to be described by words. Kayleigh Blair, another user, added that she could not stop herself from bawling her eyes out every time she looks at the picture.

Baumgaertner had posted two pictures of the penguins hugging on Instagram originally. He had written in the captions about a lesson he had learned from the scene. He said that during times such as the one in the picture, he realized that the actual lucky ones are the ones who can be with those people that are the most loved by them.

He continued speaking about the penguins hugging who belong to a species commonly called Fairy penguins. He said that the two penguins were standing on a rock, poised like that while looking over the skyline of Melbourne for several hours. They held each other’s flippers and watched the lights from the skyline sparkling in the air and the night ocean. Then a volunteer came up to him and revealed their story.

A Tragic Story Lay Beneath

The white penguin was an older one whose partner had left her behind. The volunteer pointed out the male on the left side, who was much younger, had also lost his mate recently. The story does not end there. Apparently, the two then meet each other regularly, being a source of comfort for each other. The penguins hugging, stand like that for hours while gazing at the lights dancing in the city on the other coast.

Baumgaertner added that he had spent three nights completely with the colony of penguins before he got the snaps. He said that lights were not allowed and the little ones were always moving, cleaning each other. But he got lucky in that one beautiful scene.

Read: The Story Behind A Wildlife Photographer’s Award-Winning Picture

Some days later, he took another snap and gave some more of the story of the two penguins hugging. He said that the scene was unique in the whole colony. Everyone else was running around or sleeping. These two just held each other and spent hours possibly talking in their penguin language. The pain was the reason for them uniting. He said that love is sometimes found in the most unexpected of places.